Markets like to trend as supply and demand are not always in balance.

Increased supply over a period of time pushes prices lower, as sellers are lowering their prices to find buyers in the market. Similarly, increased demand pushes prices higher over time, as buyers keep bidding prices to higher levels.

While they’re relatively easy to apply and draw on a chart, here are some important trendline trading tips that all trend-followers need to know about.

Look for at least three touches on the trendline

When trading with trendlines, make sure that the price touches the trendline at least three times. Although a trendline can also be drawn with only two touches of the price, these trendlines shouldn’t be considered as relevant for trading.

One of the most common mistakes regarding trading with trendlines is to trade on an unconfirmed trendline which connects only two points of the price. As a rule of thumb, the more times the price has touched the trendline in the past, the more important the trendline becomes.

The following chart shows a confirmed trendline on the EUR/USD pair which has been tested three times so far. As you can see, the falling trendline connects consecutive lower highs in a downtrend.

A trader could enter with a short position each time the price reaches the trendline from below, touches it and reverses. A stop-loss order should be placed just above the trendline. 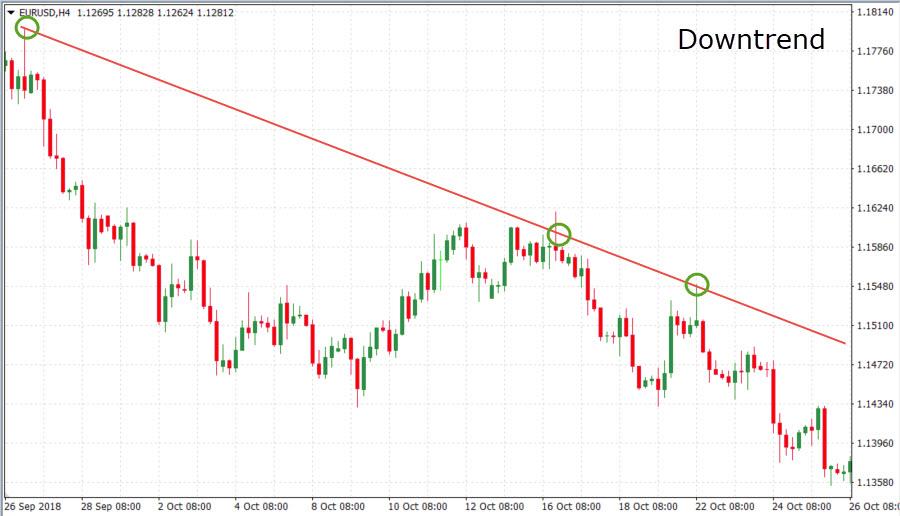 Measure the time between consecutive touches

Besides trading bounces off a trendline, you can also look to trade breakouts above a falling trendline and below a rising trendline. These breakout trades are usually followed by a large trading momentum in the direction of the breakout, which makes them a popular trading approach among day traders.

However, before a breakout occurs, the price tends to cluster around the trendline and the time between the consecutive touches tends to become shorter.

This is best explained by the next chart. 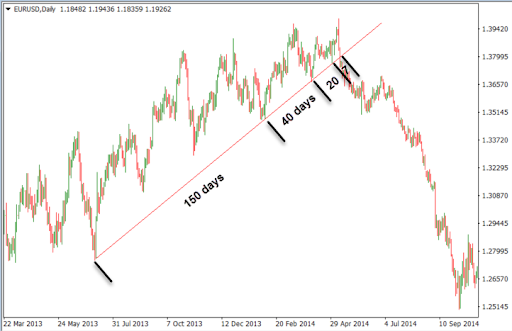 As you can see on the EUR/USD chart above, we draw a trendline that connected four higher lows between 2013 and 2014. As the uptrend started to lose momentum, the times between each consecutive touch on the trendline became shorter.

Finally, the time between the last two touches was only seven days, after which the pair broke below the trendline and started a strong downtrend. Buyers weren’t strong enough to defend the trendline as sellers kept pushing the price lower.

A fake breakout occurs when the price looks like breaking above or below a trendline, only to reverse its course and leave the breakout trader with a losing position.

Here’s an example of fake breakouts.

Almost all trendlines that you apply to a chart will occasionally have fake breakouts. The key is to connect as many higher lows (or lower highs) as possible, and leaving the fake breakouts outside the trendline.

Fake breakouts are actually a great trading setup, especially if they come together with bearish or bullish indicator divergences. This is one of my favourite trading strategies – catching fake breakouts with pinbar patterns and confirming them with RSI or Stochastic divergences.

Use other tools to confirm a setup

While trendlines and fake breakouts can produce many successful trading signals, it’s still important to confirm a trade setup before entering into a trade. Popular tools to confirm trades based on trendlines include Fibonacci retracements, candlestick patterns, and technical indicators.

Since trendlines are used to connect to higher lows during uptrends and lower highs during downtrends, we’re of necessity dealing with a trending market. That’s where Fibonacci retracements come into play.

In an uptrend, we want to catch the end of a price correction (counter-trend move) that bounces off a rising trendline. If that level also aligns with an important Fib level, such as the 38.2%, 50% or 61.8% level, we have a high-probability setup that we can trade.

Take a look at the following chart.

The EUR/CAD pair reached a falling trendline at a level that aligns with the 61.8% Fib level. This gave us a double-confirmation to enter with a short position by placing a stop-loss just above the trendline.

Finally, overbought and oversold levels of oscillators, as well as bearish and bullish divergences that form around trendlines often confirm high-probability trade setups.

All mentioned confirmation tools can also be used when trading fake breakouts.

Just like most other technical tools, trendlines return better results when applied to and traded on higher timeframes, such as the 4-hour, daily, and weekly ones. A large number of market participants follow trendlines and other technical levels on longer-term charts, which increases their importance as well.

Wait for pullbacks to confirm a broken trendline

If you don’t catch the initial breakout above or below a trendline, don’t chase the market. Instead, wait for the price to complete a pullback to the broken trendline to enter in the direction of the breakout.

The following chart shows a breakout followed by a pullback. 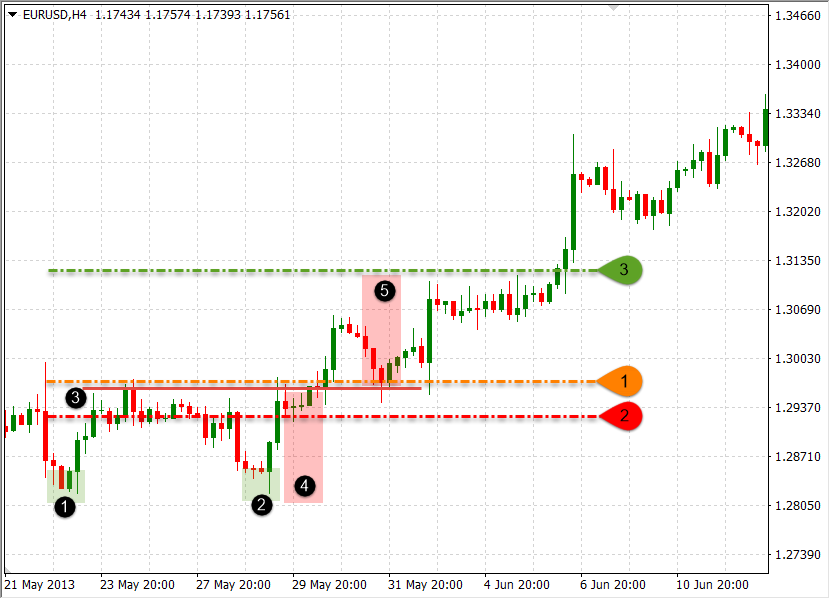 A trader who missed the initial breakout could wait for the pullback to enter with a short position. A stop-loss order could be placed just above the trendline or the recent swing high.

What to Avoid When Trading Trendlines

So far, we’ve covered some tips and tricks on how to trade trendlines. Still, when it comes to trendline trading, there are some common mistakes made not only by beginners but also by experienced traders. We’ve covered the top three things to avoid when trading on trendlines in the following lines.

This point refers to the first and fourth points mentioned earlier. For a trendline to be valid, the price has to touch it at least three times. It’s not enough to draw a trendline based on only two touches of the price.

As a rule of thumb, the more times the price touches a trendline, the more important the trendline becomes.

Besides having a confirmed trendline to trade on, you should also wait for a trade setup to confirm after the price reaches near the trendline. This can be done with tools such as candlestick patterns, Fibonacci retracements and bullish/bearish divergences of technical indicators.

Don’t move your trendline after you enter a trade

Another common mistake when trading trendlines is to move a trendline to get a nicely-looking trade setup. It’s easy to find buy or sell opportunities by moving trendlines and adjusting their slope, but we strongly advise against this practice.

Once you apply a trendline based on at least three touches of the price, leave it as it is until it gets broken. Any failure by the price to break a trendline should be considered a fake breakout (which, by the way, can be a great trading opportunity.)

Trendlines that are too steep are not sustainable

Finally, trendlines that are too steep get usually broken faster than trendlines that have a smaller angle. According to the Gann theory, uptrends and downtrends can often be described by trendlines at a 45-degree angle.

A strong uptrend rising at a 70-degree angle soon becomes heavily overbought, which means that traders would be better off trading a breakout to the downside than joining the trend at a possible peak. 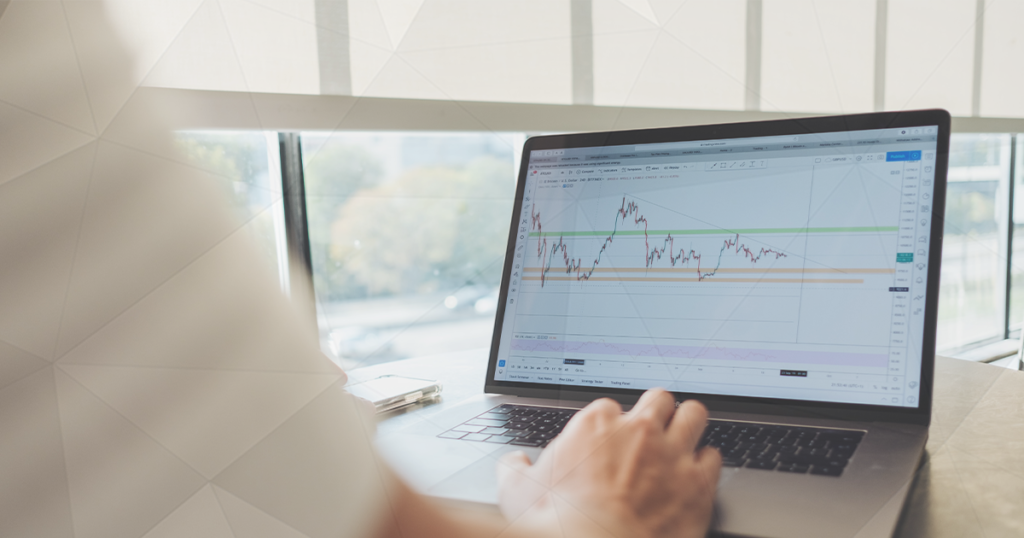 Do you want to hold your trades for a longer period of time, without constantly checking your charts? Do you want to increase your profit…