In general, there are four main types of stop loss orders:

What is Scalping? (Including an Awesome Strategy You Can Use)

What is Shorting the Market?

Before we dig deeper into trailing stops, it’s important to draw a distinction between stop loss and pending orders. Beginners to the markets often confuse these two order types as they share certain names which may sound similar to inexperienced traders. While pending orders are beyond the scope of this article, let’s just mention a few in order to distinguish them from stop loss orders.

These are not stop loss orders!

However, certain trading platforms allow to combine them with trailing capabilities to create a trailing stop limit for example.

How Do Trailing Stops Work?

However, if the price moves in the opposite direction after it reaches 1.2280, the trailing stop will stay at its most recent level of 1.2180. As you can see, trailing stops essentially reduce your potential loss when compared to standard stop loss orders as they tighten with each new price tick.

Trailing stops can also be used to lock in profits. Let’s say that the EUR/USD exchange rate from our example rose to 1.2400. Our trailing stop would trail the price and move the stop-loss order to 1.2300, i.e. 100 pips below the current price level. Since we entered the trade at 1.2250, the trailing stop locked in 50 pips of profits if the price starts to reverse.

Finally, if you’re wondering what time intervals are trailing stops – there is no time limit on trailing stops. You can keep them active as long as you want.

How to do Trailing Stops with MetaTrader

Many trading platforms feature trailing stops, and the widely-popular MetaTrader platform is no exception. To place a trailing stop with MetaTrader 4 or 5, simply right-click on the open position, select Trailing Stop from the drop-down menu and select the number of pips to trail the price. 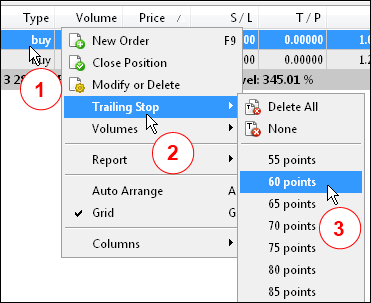 Hint: Many brokers use 5-digit price quotes, with the fifth decimal place called a pipette or point. In the picture above, a trailing stop of 60 points would equal to 6 pips.

A loan that the owner can convert to ordinary shares in that company, given a set of conditions defined in the original loan.

Also bid-offer spread. The wider the spread, the more the trader pays, reactively.