Brief overview: The Nikkei 225 is the leading index of Japanese stocks. It is price-weighted and includes the largest blue-chip companies on the Tokyo Stock Exchange. It is the Japanese equivalent of the Dow Jones Industrial Average Index.

Full overview: If you’re serious about trading the markets, there’s no way around getting to know all major global stock indices. The Nikkei 225 Index is one of them, tracking the 225 largest blue-chip companies that trade on the Tokyo Stock Exchange.

Here, you’ll find all you need to know to get started trading the Nikkei. Also, we’ll explain what companies are included in the index and how it relates to the value of the Japanese yen.

The Nikkei 225 is a major stock index that is composed of Japan’s top 225 companies traded on the Tokyo Stock Exchange. It’s a price-weighted index where the price of each constituting stock affects the total value of the index.

Just like the Dow Jones Industrial Average or the UK’s FTSE, the Nikkei 225 is a major global stock index closely followed by investors and large market participants. Interestingly, the index was called the Nikkei Dow Jones Stock Average from 1975 to 1985.

How Was the Nikkei 225 Established?

The Nikkei 225 is the oldest stock index in Asia and has been continuously calculated since 1949.

The term Nikkei comes from “Nihon Keizai Shimbun”, a Japanese economic newspaper which sponsors the calculation of the index.

What Companies Compose the Nikkei 225?

All constituent stocks in the Nikkei index are listed by the price of their stock and not by market capitalisation. Components of the index are reviewed each September, when new companies can be added and existing companies removed from the index.

Another major stock index that tracks the Tokyo Stock Exchange is he Tokyo Stock Price Index, also known as TOPIX. Unlike the Nikkei 225, TOPIX ranks stocks by market capitalisation, including companies listed in the First Section of the TSE that includes more than 2000 companies.

Although some market participants consider the TOPIX to be a better representative of the Japanese stock market, mainly because of the larger number of companies included in the TOPIX, the Nikkei 225 still remains the most-widely watched stock index of Japan.

Nikkei 225 and the Japanese Yen

The following chart shows the relationship between the USD/JPY pair and the Nikkei 225 (green). Note that a falling USD/JPY represents a stronger yen, and vice-versa. 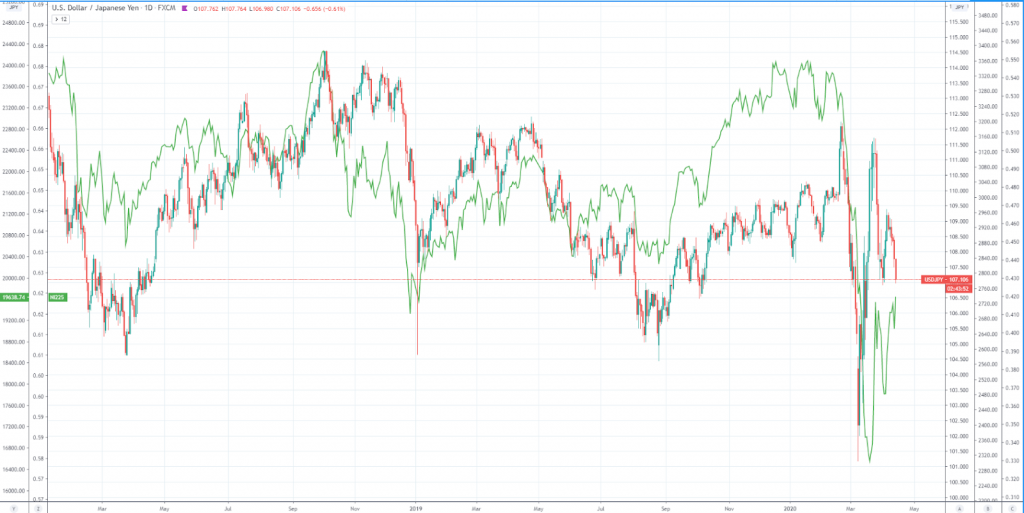 In the late 1980s, Japan faced a large asset bubble fuelled by the government’s economic stimulus to counteract a recession. The recession was caused by a large appreciation of the Japanese yen, backed by enormous trade surpluses with the United States. At a point, the yen rose as much as 50%, making Japanese exports less competitive and pulling the country into an economic recession.

The bubble burst in 1990, sending the Nikkei 225 index down 33% from its peak. In 2008, the index traded 80% below its 1989 peak. However, the Nikkei has recently staged a comeback and rebounded between 2012 and 2015 after massive economic stimulus from the country’s government and the Bank of Japan. Still, the index is trading at around 50% of its 1989 high.

How to Invest in the Nikkei Index?

While you can’t directly buy a stock index, investors can get exposure to the Nikkei 225 by purchasing ETFs that are designed to correlate with the index. Popular ETFs that track the Nikkei 225 include:

ETFs are a popular choice of investors who use strategies that include trading on margin and short-selling. Trading on margin allows you to magnify your exposure to the Nikkei 225, but bear in mind that it also increases the size of your potential losses. Short-selling allows you to profit from falling markets, such as during economic recessions. However, when investing in yen-denominated ETFs, foreign investors have to take exchange rate risk into account.

Another benefit of buying ETFs is that investors can easily create a diversified portfolio by meeting specific asset allocation models, such as between stocks and bonds.

The Nikkei 225 is a major stock index that tracks the 225 largest blue-chip companies listed on the Tokyo Stock Exchange. Unlike some other indices that are based on market capitalisation, the Nikkei 225 is calculated by using the share price. That’s why some investors and traders favour the TOPIX, which is based on market capitalisation and also includes a larger number of companies.

While investors aren’t able to directly buy the Nikkei 225, but they can get exposure to the index by purchasing Exchange Traded Funds (ETFs). Some notable Nikkei ETFs include Blackrock Japan’s iShares Nikkei 225 and Nomura Asset Management’s Nikkei 225 ETF.

The Nikkei 225 also provides important clues for FX traders. The index is correlated with the Japanese yen, with a rise in the index usually accompanied by a fall in the currency, and vice-versa.

American Depositary Receipts or ADRs. These are shares of foreign companies listed on exchanges in the USA in dollars.

They allow US investors to get access to overseas shares without the hassle of having to exchange currency, open brokerage accounts overseas and so on.

The cost to a trader of maintaining a position. This might be in form of overnight financing on simple CFD trades but can also include the costs to insure, transport or finance on more complex trades.